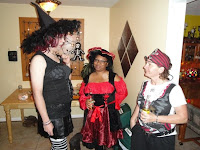 I wasn't able to get online at all yesterday after I left work, and I only had a few minutes to check my email at home, so this post comes twenty-four hours late, so I've had time for a little more analysis than I might've posted in a raw recap.

Friday wiped me out. Between sitting up all morning waiting to get paid, then running around all afternoon paying bills and stuff, then getting too little sleep before going back to work, I was exhausted. I had my Halloween costume assembled, but I had to put a few finishing touches on myself. I'd made a half-hearted effort to shave my legs Friday night, but my heart wasn't in it, so I resolved to wear black tights with my costume.

Getting ready Saturday evening, I remembered that I had a pair of black-and-white striped thigh-highs that I picked up at Hot Topic a couple of years ago. I think they're meant to stay up on their own, but I wore a garter belt anyway, just because. I had trouble fastening the rear set of tabs, so I enlisted Nate in hooking me up. I told him he could scratch an item off his bucket list. The expression on his face was priceless.

I ditched the "Eris" makeup in favor of something I thought was Halloweeny, a Revlon palette of smoky greys and green. The polish I bought turned out to be more of metallic onyx, but it worked with my outfit, and it matched the tone of my star earrings almost perfectly.

By the time I was ready to go, Nate had our neighbors all psyched up to see me in costume, so I strolled across the street for a photo op before rolling out. Because I forgot to bring along my camera, the only photos of me from this excursion were taken by other people. A few of them have appeared on Facebook and elsewhere, so I'll try to find one or two to post here for everyone's edification and entertainment.

The party at Mike & Mark's was great. I am not a party person, in the usual sense. I like to meet and hang out with people, and maybe have a drink or two, but that's all. That's the main reason why I don't spend a lot of times in bars. That, and I can only put up with so much cigarette smoke. This party was different, somehow. I only knew a couple of the people there, but the others I met were very friendly. There was dance music playing on Sirius. There was a big cooler outside filled with beer and wine coolers, and the fixings for assorted mixed drinks in the kitchen. There was food - I've seen wedding receptions that had smaller spreads.

I think I was the only trans person there, though I wasn't the only one in a female costume. There were three fellows from the Hampton Roads Men's Chorus, dressed as the Golden Girls (they had a female friend dressed as Rose to fill out the set). Towards the end a carload of friends showed up dressed as assorted dead people, including a guy dressed as Jackie Kennedy on November 22 (a pink Chanel suit covered in blood) and another dressed as Anna Nicole Smith (wearing stripper shoes that looked impossible to walk in).
Towards the end of the party, I was talking to a woman dressed as a fairy. I think she was a little drunk. She asked me what I was dressed as. I asked, "The hat doesn't give it away?" She told me she loved my costume, but I should ditch the witch hat and tell people I was a hooker. OH NO SHE DIDN'T!!!

I tried to explain how demeaning that was, both to me and to women in general. I told her about the people I have known who turned to sex work because they couldn't find regular employment. I told her telling folks I was a prostitute could get me arrested. She would not be dissuaded. I broke off the conversation and found someone else to talk to.

The picture above shows me, Tiffany and her girlfriend Danni.