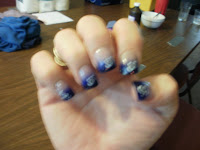 I haven't been out of doors en femme, as Jaye, as myself, since January. That's the longest span I've been without dressing since I moved out of Charlotte in September 2007. That's been hard to bear. My friends know I wear women's clothing all the time, but it's been so long since I presented myself in a female manner.

How fragile one's identity can be. Since I came out to the older children, I'm intermittently being peppered with questions about this and that. I've tried to be understanding and accommodating, answering their questions to the best of my ability without straying into TMI territory. I've been showing the girls my jewelry. The younger one has even asked me for tips about makeup once or twice. It's not enough. I've been reduced from an out-and-about transperson back to a closeted crossdresser. It's killing me one day at a time.

Over the weekend, Nate's ex bought a couple of sets of those stick-on artificial nails for her daughter and herself. They're the inexpensive kind, and they pop off with the least provocation. They rode off to the beach a little while ago, leaving the remains of both packs on the counter downstairs. I'm afraid I gave into temptation and picked out enough loose nails to fit myself out with a set. I haven't worn my fingernails long for a while now, and haven't kept them polished since the debacle at work last August. They're pretty, if a little gaudy, certainly flashier than I would have indulged in at a salon. All the same, it was nice to have pretty hands again, even if only for a few minutes. It was nice to feel more like myself again.
Posted by Jaye Schmus at 5/03/2010 11:17:00 AM