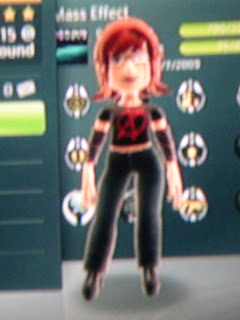 I got my Xbox 360 back via UPS Friday. I was without that cursed machine almost two weeks, yet I survived. It took me a little while to get everything reconnected, then to go through the Xbox Live Marketplace and find all the material I had previously downloaded. A few months ago, Microsoft upgraded the Xbox Live Experience so that each player could create an avatar. In previous iterations, one's avatar was a flat, 2D image. Now, avatars are fully-realized little people, capable of movement and and interaction. My previous avatar was a reasonable facsimile of my male self, but this time around, I decided to try for something that looked more like my true self. I even have an outfit that looks something like this!