Speaking of things up in the air, I've been meaning to put up the second of my "writing assignments", furnished by the participants in my first "contest". If and when I get 'round to having another one, I promise to make the questions a little less obscure. I'll try to, anyway.

Chrissie gave me this:

For as long as I can remember, I've been obsessed with flight. I've spent a goodly chunk of my life gazing into the sky, at whatever was cruising above my head. It started with birds, but grew into flying machines. One of my oldest vivid memories is from when I was 7. My parents had just gotten involved with the local Little League machine, and I found my uncoordinated self on a tee-ball team. I wasn't really interested in sports then, no more than I am now, and I found myself consigned to the distant outfield, where no one ever hit a ball.

I was at a practice, way way out in right field, and I remember that the world filled with sound. There was an ominous roar, and four F-14 Tomcats (in a diamond formation) cruised low over the ball field and disappeared over the horizon. Looked sort of like this: 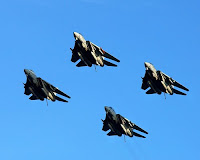 Except that they were lower. Almost tree-top height. I'm almost sorry to say that I lost all interest in baseball at that moment. I've been obsessed with flying things ever since.

For all my interest, I didn't ever get an opportunity to fly until I was 33. Neither of my parents liked to fly. Dad would do it for work, but Mom wouldn't get into an airplane for money. None of the numerous long-distance trips we took when I was a child were by air. We always drove, even if the destination was New York or Ohio.

I've only been up three times. Two of those were commercial flights, up to Dulles, VA from Charlotte, NC and back. Taking off was the best part, feeling the tug of gravity as the plane climbed, followed by the gentle release as the plane clawed its way into the sky. The flying itself was almost exactly like riding a bus, down to the bumps of turbulence as we passed through a thunderstorm on the way back to CLT.

The third and so far last flight was a recreational hop in a vintage warbird. I think I've mentioned here before that I volunteered at the Carolinas Aviation Museum in Charlotte. Four years ago, a friend loaned me the money to pay for a 45-minute ride in an OV-1 Mohawk, a Vietnam War-era Army observation plane. It looks like a big grey bug. THAT was flying. The Mohawk is no bus. Plus, we got to formate with a restored B-17 Flying Fortress, and I got my first ever air-to-air photos. It was a lot of fun for an airplane geek like me.

Anyway, how all this ties into my being transgendered is the feeling of being trapped in my own skin. Who wouldn't want to fly away from all this?

I did have an actual dream involving flight this week. I very rarely remember my dreams anymore, so this was noteworthy. I dreamed I was riding in the back of a little pickup truck. I say it was little, because my feet were dangling out over the open tailgate. I was riding along a road, when suddenly the truck flew up into the air. Next we're flying over a winding river, with sparse woods on either side, dotted with what looked like junk or repair yards on either side. Every so often, I would see the tail of an airplane poking up out of the trees. After a few minutes of this, I woke up.