Out of My Mind 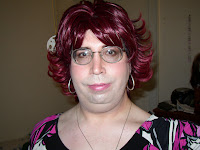 Saturday morning I left work after a nine-day stretch. I lucked into a four-day weekend, Saturday to Tuesday. I was soo looking forward to it. Alas, I forgot that I had neither TV nor internet at home.

I spent Saturday out running errands. I went to the nail salon with the intention of getting the works. I thought better on the cost thereof and settled for getting my eyebrows done. Sunday I went to the Gender Expression Project's "Everything You Wanted to Know About Being Transgendered (but were afraid to ask)". That was pretty cool. The rest of my time off was a repeated cycle of sleep, reading (Stan Nicholls' omnibus edition of his Orcs trilogy), Xbox 360 (offline, of course) and watching assorted movies on DVD. That last was pretty cool, as I saw the Richard Donner cut of Superman II and the original Taking of Pelham 123.

Now I'm back to the old grind.

BTW, the photo to the right is one I shot of myself Sunday after returning from my outing. I know, the hair isn't the right style for my face, but my usual red piece is looking a little ratty, and I didn't have the funds to get another this go around, so I recycled this one. It's a little short, but it's fun and flirty.
Posted by Jaye Schmus at 6/18/2009 01:08:00 AM